Katun Corporation proudly presents its new Brazil headquarters, and celebrates 40 years in the industry, at an event held February 6, 2019.

São Paulo, Brazil – (February 2019) The event took place in the auditorium of Katun’s new and modern offices, located in the eastern zone of São Paulo, gathering together many customers and guests from all regions of Brazil.

The layout of the new office, decorated with the traditionally modern spirit that Katun has maintained since its founding in 1979, brings to the sector the vanguard that has always made Katun stand out, incorporating new leisure areas, pantry/bar, formal and informal meeting rooms, a training room, conference room, laboratory, and much more, in an area at least twice as large as in the former building.

The opening of the new space culminated with a presentation of the four decades that Katun completes in 2019, recalling important dates for the company, highlighting the quality, regularity, and care in the development of OEM-equivalent products in order to offer the best cost/benefit of the market, a premise that Katun has maintained during all of these years. The formalities were carried out by the General Manager of Katun Brasil, Mr. Helton Mourão, by the National Sales Manager, Mr. Junio Alcantara, and by the Operations Manager, Eng. Adalberto Savi, in addition to participation by the illustrious CEO of Katun Corporation, Mr. Robert Moore, who informed the market that: “Katun is once again a distributor and a manufacturer, and thus your best business partner,” as well as the General Manager for Latin America, Mr. Alejandro Bejar.

The customers present received metal name plaques, with the thanks of Katun for the decades of partnership, as well as exclusive gifts in order to celebrate 40 years in the industry.

Closing the ceremony was a presentation by humorist Yakko Sideratos, and then all guests were taken on a walking tour of the new Katun Brazil offices. Upon returning to the auditorium, there was a cocktail reception, worthy of the company’s 40 years, that continued until late in the evening.

(CEO of Katun Corporation, Mr. Robert Moore)
“Katun is once again a distributor and a manufacturer, and thus your best business partner.” 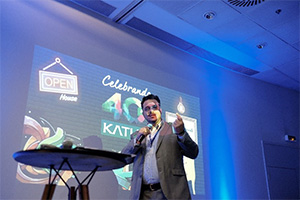 (General Manager of Katun Brasil, Mr. Helton Mourão)
“We have in the DNA of the company a traditionally modern spirit. And due to the fact that we bring together our legacy of four decades with this spirit of modernity, I am absolutely certain that we will be prepared for the next 40 years.”

And the official site of Katun www.katun.com where you will find a complete catalog with products and information.